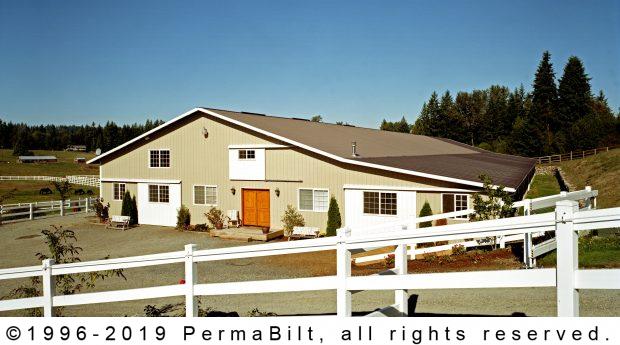 Although PermaBilt® is best known for building new pole barn buildings, occasionally we build extensions and additions to existing buildings. This was the case with our Snohomish Washington client who wanted a lean-to added to his existing pole barn building and horse arena. This was not the first building addition to the original pole barn. He had previously added an arena, trophy room, lean-to and addition. This new lean-to was to be used for a hay/shavings area.

Our PermaBilt® Building Representative met with the barn’s owner on multiple occasions to decide on a design and size that would fit the owner’s budget as well as match the quality and appearance of the existing building. Once the design was settled upon it was a matter of our construction crew taking down the exterior wall and adding the 24’ x 24’ lean-to addition. Also the roof of the lean-to was blended into the existing roof. When the addition was complete the owner was delighted with the outcome.  His only hope was the new lean-to was going to be the last addition to his beautiful barn for the foreseeable future.

View All
“Had a post and beam shop built in Shine, WA. The experience was great, they made it look very easy.  The building is just what I had hoped and the fact that they provided financing was all the better."
Merritt – Shine